Is it OK to Pay the Minimum Payment?

This is Paul J Paquin, I’m the CEO here at Golden Financial Services. I am literally just coming out of our Friday weekly Golden Financial Services meeting and I’m excited to share what we discussed in today’s meeting. Inside our Friday debt relief meeting, we examine the week and look for the biggest financial problem that consumers are experiencing that week. The meeting is between our CEO, main headquarter’s supervisor and manager, and then we have our Florida, California and New York office managers all on the webinar.

The biggest financial problem that we found people are having this week is that they can’t afford to pay more than the minimum payment but yet they are afraid to fall behind on payments and use a debt relief program like debt settlement. A lot of people are just caught in this neverending cycle of paying minimum payments and not really getting anywhere.

Now it’s never advisable to fall behind on your monthly payments, but by only paying minimum payments, it could take a person an entire lifetime to pay off their debt. Consumers will often pay their credit card debt back 2-3 times and it’s still not paid in full when paying only minimum payments because of high interest.

How much would it truly cost me if I was to pay only minimum payments on $50,000 of credit card debt?

Let’s just suppose you can’t keep paying these minimum payments because you know you’re retiring in three years and won’t be able to afford the $1,200 per month anymore.

You know you need to do something but what are your options?

Here Are Your Debt Relief Options

You could also use debt settlement, which would get you out of debt in around three years at a payment of $850 per month.

If you qualify, one of the best hardship debt relief options is a program called debt validation. Here’s how it works; I like to use this speeding ticket analogy to explain the concept of debt validation:

Let’s pretend you receive a speeding ticket, and you were doing 85 miles per hour down a 60 mile per hour road. So, you were speeding, but all of the sudden this speeding ticket attorney gets the ticket dismissed. How can an attorney do this, when you were speeding? Basically, the attorney is just using a federal law and questioning the judge to ensure the police officer was compliant with everything this law requires. If you’ve ever opened up a law book, you’ll notice it’s quite complex, detailed and long.

If the police officer provides any wrong information, like a wrong date or if paperwork is missing, the ticket gets dismissed. The law book allows you to really go deep when disputing a speeding ticket and even deeper when it comes to disputing a debt.

Here are a few examples of how a lawyer can get your speeding ticket dismissed:

There are all types of technicalities around the subject of the instrument used to calibrate the speed, that reputable lawyers often will take advantage of and use when trying to fight a speeding ticket.

Similarly, if you were ticketed within 500 feet of starting up from a stop sign or light, the officer will not be able to prove having paced your car for a reasonable distance.

“The Farther Back the Officer, the Less Accurate the Pace. For an accurate “pace,” the officer must keep an equal distance between the patrol car and your car for the entire time you are being paced. The officer’s speedometer reading, after all, means nothing if the officer is driving faster than you are in an attempt to catch up with you. That’s why an officer is trained to “bumper pace” your car by keeping a constant distance between the patrol car’s front bumper and your rear bumper. Doing this correctly requires both training and good depth perception, and it becomes more difficult the farther behind the officer is from your car. (The most accurate pace occurs where the officer is right behind you.) But patrol officers like to remain some distance behind a suspect, to avoid alerting a driver who periodically glances at the rearview and side-view mirrors. So if you know an officer was close behind you for only a short distance, your best tactic in court is to try to show that the officer’s supposed “pacing” speed was really just a “catch-up” speed. You will want to ask the officer the distance over which he or she tailed you. If the officer admits it was, say, only one-eighth mile (between one and two city blocks), it will help to testify (if true) that you noticed in your rearview mirror that the officer was closing the gap between your car and the patrol car very quickly. This would have the effect of giving the officer a high speedometer reading. When your turn comes to testify, emphasize (if true) how you initially saw the patrol car some distance back in your rearview mirror, then saw it bear down on you quickly. Be sure to also testify (if true) that you periodically glanced at your speedometer, which indicated a steady speed, and that you didn’t slow down when you saw the patrol car. During your final argument, you should emphasize the point that your testimony and the officer’s both show that the officer was actually closing in on you when the officer claimed to be measuring your speed, not truly pacing you at a constant speed. Then, if the above formula will result in your speed being below the limit, explain that there is a simple mathematical formula to show your true speed. Show how it is derived (see above), and how, when the numbers are plugged in, it shows your speed was below the speed limit.”

Why are we talking about speeding tickets??

However, with debt it doesn’t usually get dismissed, instead, it becomes legally uncollectible. (this is an easy way, which is cheaper)

Debt can get dismissed, but this would require legal representation. If a creditor violates your legal rights, a debt relief lawyer could use these violations as leverage. The lawyer would basically go to the creditor and say here are these legal violations and we are going to sue you now, or you can dismiss this debt. The credit card company would choose to dismiss the debt, knowing that the alternative is for them to get sued and make the news for credit card fraud, and paying even more in the end due to the legal violations.

Or at times, a person could show up to court for a credit card summons and just by the creditor skipping court the debt could get thrown out. In many cases, using debt validation to dispute a debt and prove it to be legally uncollectible is the cheapest way to escape a debt and its negative effect on credit scores.

Legally, the debt collection company can no longer report the debt on the consumer’s credit report once it becomes legally uncollectible – because it’s invalidated. Instead of settling a debt and then having late marks and collection marks on your credit for up to seven years, you can dispute your debt with debt validation, proving the debt to be legally uncollectible and not having to pay it! And getting it removed from your credit entirely in some cases. 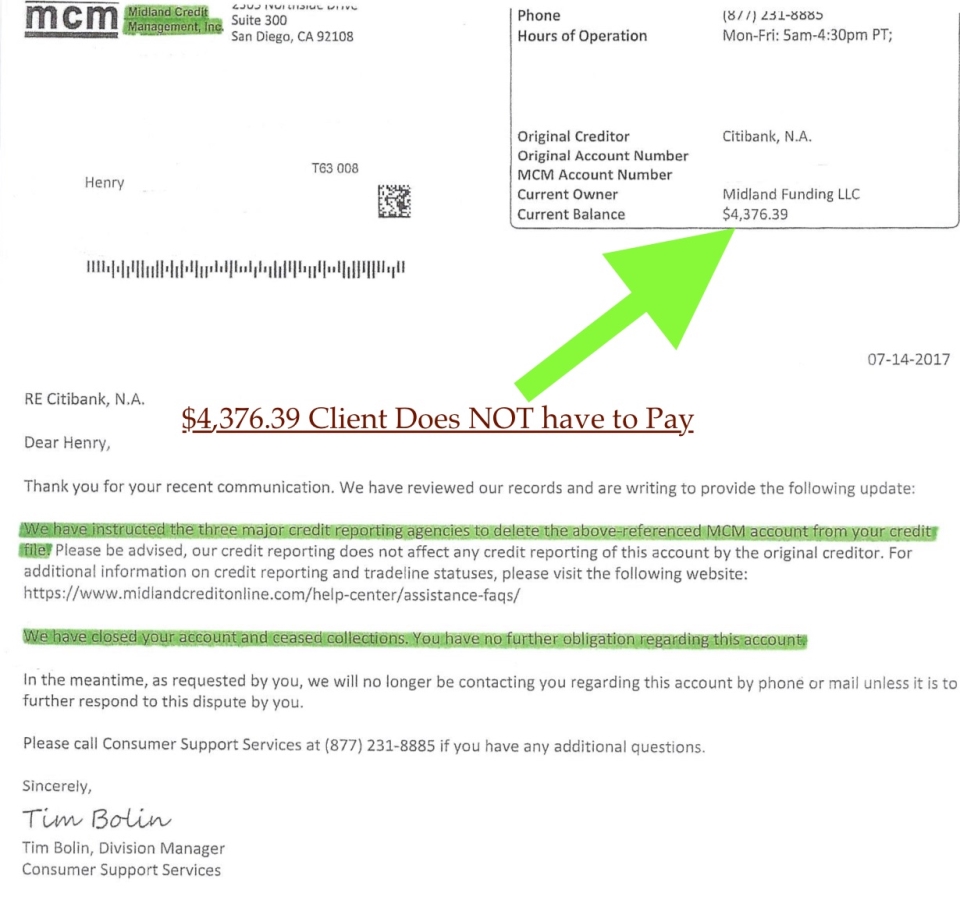 Here’s the debt calculator that you can try out for free on GoldenFS.org. This debt calculator lets you learn ways to pay off your debt faster on your own and also lets you compare debt relief programs, including debt settlement, validation and consumer credit counseling. You can also use this debt calculator to formulate a debt snowball payoff plan.

I had a client today with close to an 800 credit score. They went to Discover and received a balance transfer card that offered 0% interest for 18 months. The client transferred all of their high-interest credit card debt onto this 0% card and plans to get the entire balance paid in full within the 18-month  0% interest period, which would eliminate all of their interest! The only thing extra they had to pay was the 3% balance transfer card fee.

Balance transfer cards carry an upfront fee of 3-5% of the amount of debt that you want to transfer onto it. Don’t forget to add that into the equation.

Paul J Paquin studies debt relief options and consumer laws on a daily basis, continually looking for new and more effective ways to help consumers achieve financial freedom. Paul enjoys writing as an author on various blogs across the internet, including on Medium.com, Quora, Google, Reddit, Equities.com, ValueWalk.com and most recently was even featured on CardRate.com.