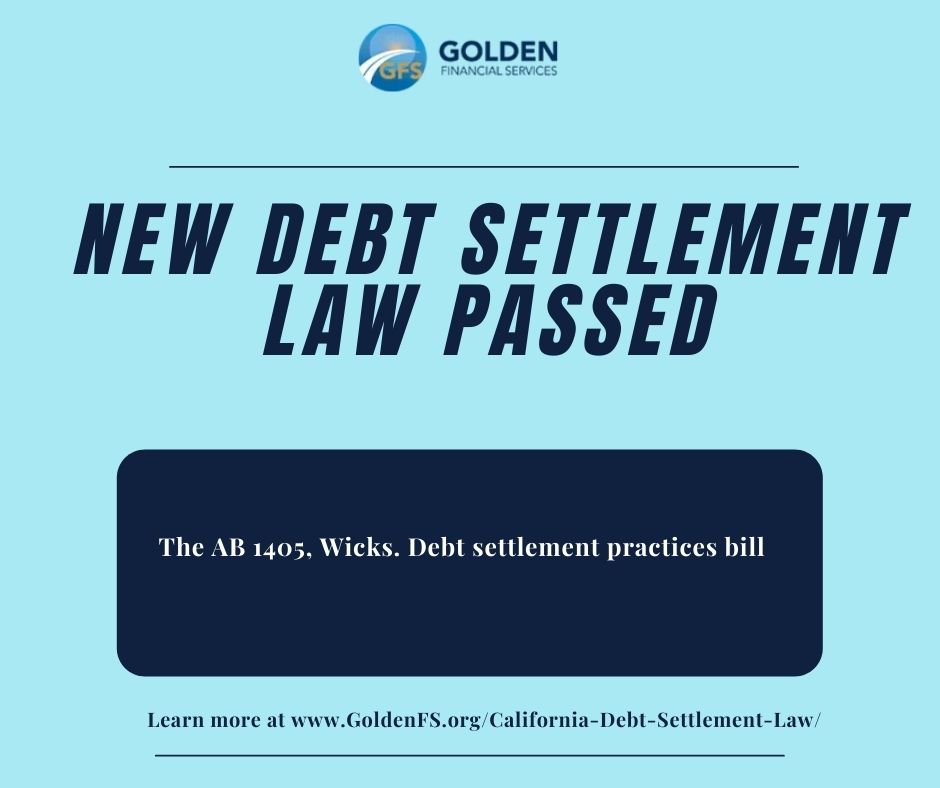 A new California debt settlement law was passed in 2021, called the AB 1405, Wicks Debt settlement practices bill. Buffy Wicks, a Democrat that serves under the California State Assembly, is the author of the bill. Wicks is probably most famous for her viral YouTube video, which made a point about the struggle of working mothers.

“When California Assemblywoman Buffy Wicks rushed to the floor to vote on State Bill 1120, she intended to make a point about the state’s housing crisis. But a video of that moment has gone viral for making an entirely separate point about the struggle of working mothers.”

Why the new California debt settlement law was passed?

Similarly, a debt settlement program that doesn’t have a plan in place to address potential downsides is like a doctor not having an alternative medication for his patient if the one medicine produces undesirable side effects.

The road to financial freedom is not always straightforward because obstacles often come in the way and the path can zig-zag at times. So debt consolidation companies need to be prepared to deal with all scenarios.

According to Paul Paquin, the CEO here at Golden Financial Services, a licensed debt management provider in Texas and California debt relief company: “It’s the debt counselor’s moral, legal and ethical duty to verify the consumer understands how the debt settlement program will work, including each downside.

Furthermore, a debt counselor will get more sales if they are confident in explaining downsides and how each would get addressed, over someone who sounds like a shady car salesman.

As an example, if the consumer receives a summons – How will it get resolved? Debt counselors need to tell the truth. And if the truth is not an appealing option, perhaps it’s time to find another company to work for, one that offers a program which people want to sign up for”.

Erika Paz explains in her recent article about the new debt settlement law and regulations:

“As California emerges from the pandemic, some residents face crippling personal debt, even as many of the state’s richest residents have seen their wealth grow. The booming debt negotiation industry is among the economic winners, composed largely of online companies that promise to reduce unsecured debt by negotiating with banks and credit card companies on the customer’s behalf.”

But consumer advocates point out, “these companies often prey on financial desperation and fail to warn customers of the potential consequences — like ending up in court.”

Wicks wants to ensure if people are working with settlement companies; “There’s transparency and empowerment for the consumer in that process.”

When does the new California Financial Protection Law Take Effect?

This California bill mimics some of the national rules under the Debt Settlement Consumer Protection Act of 2010, applying them to California-based companies. Also, new rules like giving customers a three-day “cooling off period” before the contract takes effect have been added.

The New California Law: the AB 1405, Wicks. Debt settlement practices bill will do the following:

Golden Financial Loans – Is It a Scam?

The Wicks Debt settlement practices bill, a Democratic bill, gets approved despite opposition

This California democratic bill was approved despite almost unanimous opposition from Republicans. In addition, several lobbies have removed their opposition after successfully pushing for amendments, including one that would remove regulations around referral fees, a significant source of income for the industry.

But before the most recent amendments, the debt relief industry had coalesced in opposition to the bill.

The Consumer Debt Relief Initiative maintained that the new debt settlement law would harm the same people the bill is trying to protect by driving out debt reduction companies from California. As a result, consumers would be left with fewer options and be forced to file for bankruptcy in many cases, was their argument.

This new debt settlement law is another step in the right direction to clean up the debt settlement industry and eliminate the California debt relief companies that operate fraudulently.

How do the best debt relief companies operate?

When it comes to helping people with their financial situation, the best debt settlement companies have multiple options available for the consumer. These options should include debt consolidation loans, financial hardship programs (i.e., debt settlement), consumer credit counseling, and credit repair.

Debt relief companies can then ensure consumers are enrolled in the best debt relief service based on each person’s financial goals and needs.

One of the main goals of debt relief programs is to help a person avoid having to file for bankruptcy, providing an affordable debt repayment plan.  However, if a consumer joins a debt settlement program and then has to cancel halfway through it, bankruptcy may be their only option left.

Check out the Top 10 Debt Relief Companies in the Nation.

CNBC, Mortgage delinquencies sink to pandemic low, but distress is far from over