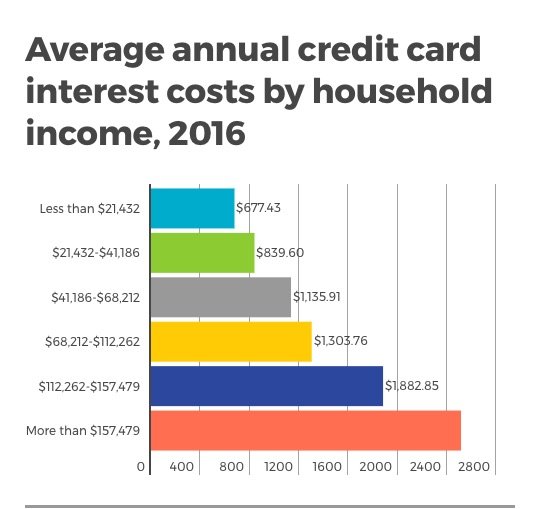 With credit card debt costing families in the United States an average of $1,300 in interest per year it is apparent that changes need to be made to curb credit card spending.  The average amount of credit card debt per family is rising dramatically when compared to 10 years ago.  This increase is not necessarily careless or irresponsible spending on the part of the debtor.  A large component of the overall increase in credit card debt is a significant increase in cost of living expenses coupled with a drastically lower increase in income.  In an article titled “2016 American Household Credit Card Debt Study,” The Nerd Wallet cites an increase of over 11% in average household debt with just 1% increase in average household income since 2002.  Americans need to find ways to adjust their spending and compensate for this new disparity in their debt to income ratios.

Teaching adults about the long term effects of excessive spending is an excellent tool to prevent it.  If someone knew that accumulating too much credit card debt could prevent them from making a large purchase such as a home or car, it would likely cause them to rethink their spending.  Sacrificing small things such as more clothes or eating out now can pave the way for the larger purchases people dream about their whole lives.  Seeing videos of firsthand accounts is often more effective than hearing or reading for the 100th time that excessive spending can be bad in the longterm.  Most people do not want to believe bad things could happen to them.  When they see someone their age or in a similar situation suffering with the consequences from a path of overspending, it can be the wakeup call they need.

People often lose track of how much it costs to repay credit card debt.  Showing how much they pay in interest on debt can be an effective deterrent.  Helping an individual understand that spending more on their credit card than they are capable of paying back each month can cost them thousands of dollars in interest each year.  It can give them the restraint they need when it comes to unnecessary purchases.

A good way to keep people aware their spending is to provide free applications that track spending and debt without a user’s input.  Seeing the amount they are spending on clothes or eating out will help them to maintain improved spending habits.  The application should give 5 and 10 year projections based upon current spending trends.  This would be an excellent way to show someone what their financial situation will be if they do not change their spending habits.  The key is to have the application link with the user’s bank and credit card.  In doing so, the information is input by the system.  This eliminates user error and minimizes the amount of user effort.

To cultivate better financial management in debt holders, it is best to start before they actually have debt.  The younger someone is, the more receptive they are to adopting financial strategies.   Numerous studies have shown the positive impact of teaching children at an early age.  One study performed by The University of Cambridge titled “Habit Formation and Learning in Young Children,” shows that children are capable of learning through imitation beginning from birth to age 5.  This study indicates that helping our children balance their debt and spending can be as simple as making wise financial decisions ourselves.

An essential part of helping our nation stop excessive spending is to stop glorifying frivolous lifestyles.  People watch their idol talk about spending $15,000 on a pair of shoes, or $250,000 on a car.  If we started showing how ignorant it is to spend extravagantly, hopefully they will begin to see it in a negative light.  When it is put in perspective how many meals could be purchased, hungry children could be fed, etc with that $15,000 wasted on shoes many will begin to see it as negative instead of positive.

People are concerned with wasting their environmental resources, yet often not concerned with wasting their money.  Comparing these to things has the potential to show people that waste and excess in any form is a bad thing.  Oftentimes, they are linked together.  Clothes that we do not need, a second car, our 15th pair of shoes, etc are things that have a negative effect on our environment when produced.  If we stop or diminish our unnecessary spending, we are likely diminishing our negative impact on the  environment.

There is hope.  Americans are a resilient people.  They have decreased their average household debt by over 25% since 2008.  Those are jaw dropping numbers.  As a people, they have truly come so far.  With the right education, and some much needed change to our culture, we can drop our debt the rest of the way.

One comment on “Reverse the Credit Card Debt Spiral, by Elizabeth Byrd”