Criminals Hack Equifax – How to Protect Your Credit & Identity 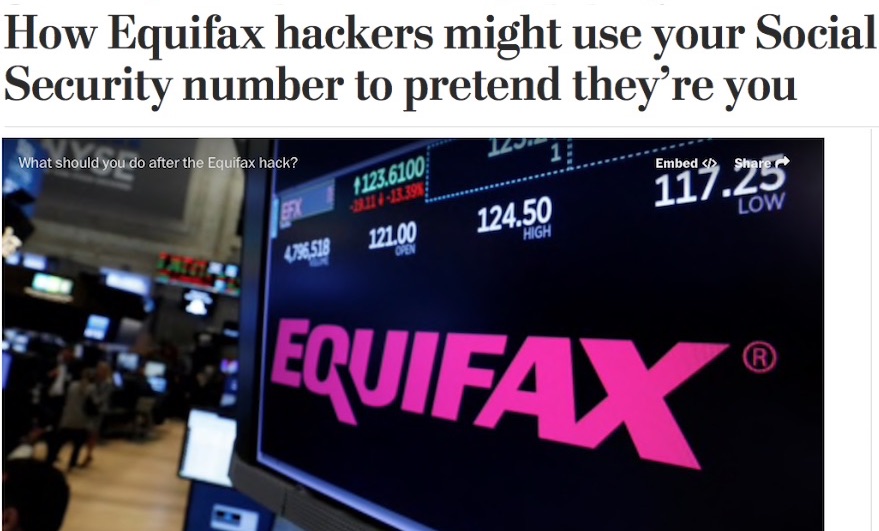 Equifax, Transunion, and Experian are the three largest credit reporting agencies in the country. Americans’ rely on these agencies to maintain accurate records and to protect their most confidential information.

On Thursday, September 8, 2017, officials released the devastating news that Equifax was hacked by criminals — and 143 million Americans had their credit files accessed and information was stolen.

Ironically, the actual break-in occurred in May and the breach continued all the way up until the end of July when Equifax finally discovered that their systems were hacked.

Equifax said that immediately after they found out their systems were hacked, they hired an independent cyber-security firm to help investigate the details of the crime.

My question is; don’t you think Equifax should have informed all of us right away, and not have waited until September?

What exactly did the hackers steal from Equifax?

Having a person’s social security number is like having their bank account number, and probably even worse.

Criminals can use a social security number to;

Technically speaking, how did the Equifax Data Breach Occur?

According to the Washington Post; “Equifax also lost control of an unspecified number of driver’s licenses, along with the credit card numbers for 209,000 consumers and credit dispute documents for 182,000 others.”

In total, how many people were affected?

820 million consumers were affected throughout the world along with 91 million businesses. Out of that, 143 million Americans were affected as of September 8th, 2017.

What to do to Protect Your Credit Report, Identity and Personal Information from Being Used

Firstly — Equifax setup the following website; equifaxsecurity2017.com — for consumers to check if their identity was accessed.

To enroll, go to www.equifaxsecurity2017.com and click on the Check Potential Impact tab.

You will then be asked your last name and the last six digits of your social security number. After you sign up you will receive a message from Equifax letting you know whether or not you’ve been affected.

Secondly, Equifax is offering “one year of free credit monitoring and identity theft protection”, which normally would cost between $15 – $20 per month.

Paul J Paquin, the CEO at Golden Financial Services, says; “Experian offering a year of free credit monitoring is a nice gesture, but considering the circumstances, they owe the people that they put at risk much more than that. Although this offer can sound appealing, I warn consumers to first carefully read the terms of the agreement that Experian will entice you to sign before agreeing to a free year of their credit monitoring service.

Here’s why; by accepting the free credit monitoring you will also be agreeing — not to participate in any class action lawsuits that will most likely be arising in the near future. Furthermore, if a person accepts the one year of free credit monitoring they will no longer have the legal right to sue Experian if further damage is done.”

Thirdly, Golden Financial Services is offering free assistance to the public to check on if their credit and identity were accessed.

Golden Financial Services is rated A+ by the Better Business Bureau and is Accredited by the International Association of Professional Debt Arbitrators (IAPDA).

Call Toll-Free 1-866-376-9846 for Free Assistance. (Upon Request — consumers can also get a free credit report, score and professional credit analysis)