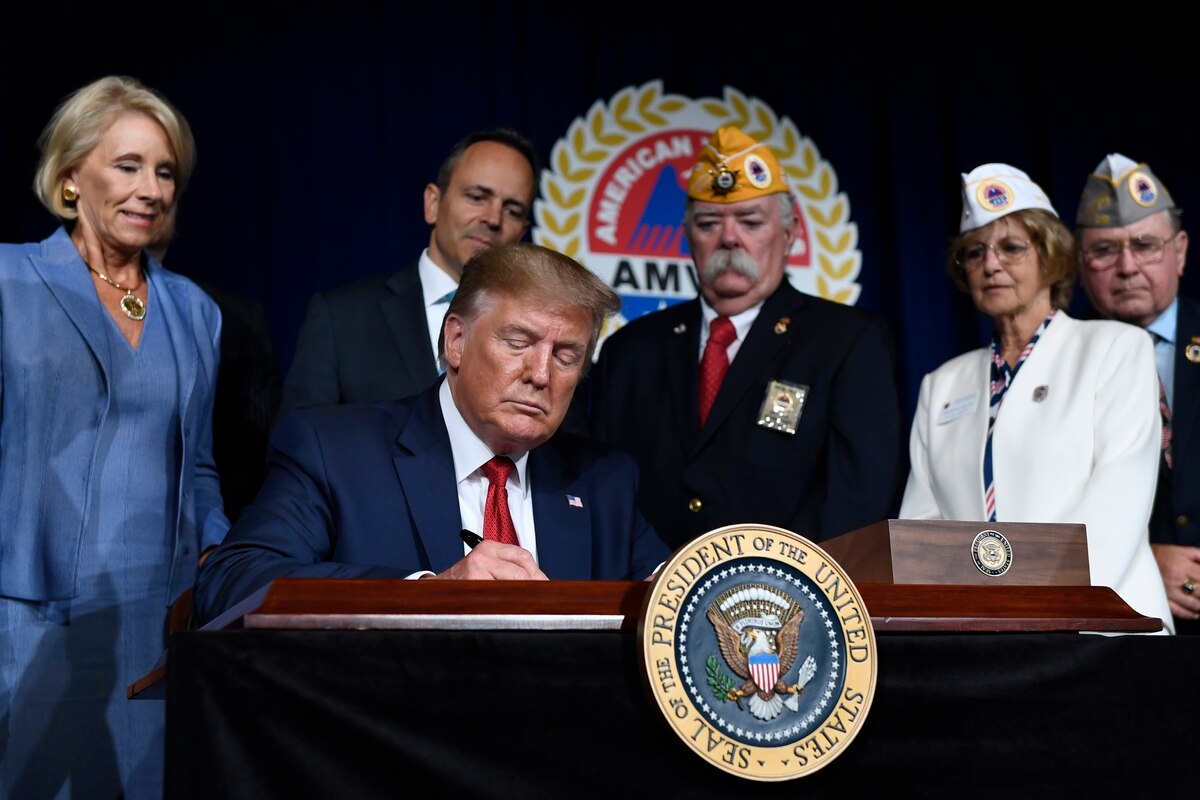 On August 21, President Donald Trump signed an executive order to forgive student loan debt for all veterans. The order empowers the federal government to set up the structure for an “expedited” process for permanently and totally disabled military veterans to have their federal student loans discharged.

However, as we have seen with presidential hopeful Bernie Sanders’ student loan debt forgiveness plan, there are ripples, collateral damage, and also unknowable effects to any plan to eliminate some of the $1.6 trillion shared student loan debt. Below is information from the experts on how the process works, and what to expect.

Forbes.com provided the full process in their write-up here: “Under the current process (which may change with today’s announcement), borrowers who are identified will be sent a letter that explains eligibility for student loan discharge as well as a Total and Permanent Disability Discharge application. The borrower then signs and returns the application to apply for the discharge. Borrowers can also apply by email or phone.

A Total and Permanent Disability application can be completed online.

Why Trump Signed the Executive Order

President Trump seeks to assist 25,000 wounded warriors in saving an average of $30,000. The executive action was presented by Trump during the American Veterans national convention in Louisville, KY. Trump was onstage with the Deputy Secretary of the Department of Veterans Affairs, James Byrne, and Betsy DeVos, the Education Secretary. Trump appears to be attempting to follow up on broad campaign promises to support war veterans.

According to the New York Times, “The executive action signed by Mr. Trump directs the Education Department and the Department of Veterans Affairs to simplify the process to speed up applications. The president said disabled veterans would not have to pay federal income tax on the forgiven debt, and he called on all 50 states to provide the same relief.”

To put it bluntly, the move clears such a small fraction of the overall student loan debt that the impact on the United States’ overall economy is negligible. The gesture is truly intended as a favor to the strong contingent of Trump supporters that are current and former armed forces veterans that have received inadequate support from the government in previous years. As permanently disabled veterans have trouble finding work, removing close to $30,000 in debt from each veteran is impactful only in the way it was intended.

According to numbers from CNBC, the student loan debt landscape for veterans remains unclear, and the proportion of veterans that are in default to the number of veterans that have applied for forgiveness proves that the process for filing isn’t well known by those in need:

“… recent records revealed the government continues to seek repayment on $1 billion in student loans from more than 40,000 severely disabled veterans who have been deemed unable to work. More than 25,000 of them are in default and just 8,500 of them have applied for forgiveness.”

The goal is to not only forgive more student loan debt for veterans but also to educate them on their options, now that the process for application will be streamlined.

As more information becomes available on this topic, we will update the blog!